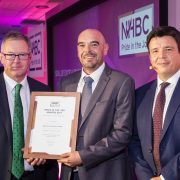 The site manager who led the transformation of a former north Devon cattle market into a sought-after housing development has become one of 100 site managers nationwide to win a prestigious industry award.

The National House Building Council’s (NHBC) Seal of Excellence Award is presented to 100 site managers nationally, out of around 16,000 who compete for the awards including 3,000 in the south west.

Cavanna Homes’ site manager Paul Whitlock became one of 14 south west winners after winning a Quality Award in the first round of the NHBC’s Pride in the Job Awards, for his role at the helm of the firm’s complex and attractive 91-home development, Market Quarter in Holsworthy.

The south west winners were announced at a smart awards ceremony at Sandy Park on Friday, September 15th.

This is the first time Torquay based, family owned Cavanna Homes has taken home the Seal of Excellence award.

It is also the first time the developer has had two site managers win Quality Awards in the first round of the competition in the same year; for his role at the helm of Plymouth’s 504K development, Ian Crighton-Brown also won a Quality Award and attended the Sandy Park ceremony.

Market Quarter, located on the edge of the town, presented multiple challenges from the outset including the logistics of levelling the site which was several metres higher in some areas, in preparation for building, while maintaining team morale.

“It’s slightly surreal,” said Paul, about winning his award. “I was very happy to win the first round, and although I hoped to win the Seal of Excellence Award, I didn’t expect to.

“I hope it proves to the rest of the team at Cavanna Homes that it is possible to win awards like these if you work hard.”

Paul, who lives in west Devon, joined the family-owned Torquay based company in 2015 specifically for the role at Market Quarter. The 43-year-old moved down from the Midlands where he worked as a site manager, for the start of the project. He became the site manager for Cavanna Homes’ Torquay development, Primrose Hill in June.

“I never go to work thinking, if I do this or this, I’ll win an award,” he continued. “But striving to work at a high standard and get things right the first time and making sure all the team are on board, is just what’s important to me.

“But, I’m just one man, I don’t lay every brick or every roof tile, so you need to have the whole team on board to achieve an award like this.”

After becoming a winner in the first round of the awards scheme, Paul said: “I treat people the way I want to be treated. One of the most important elements is creating a team ethic – a we’re all in it together attitude.

“Although the certificate has my name on it, it’s for everyone who works on the site, from the lad who sweeps the houses out to the man at the top. We’ve all got a role to play, and if everyone feels included and important than you’re more likely to get the best out of them.

Fred Sureshkumar, head of construction at Cavanna Homes, added: “Paul has done brilliantly; this was a complex project with many difficulties and he did a great job.

“We’re really excited by Paul’s achievement because it will hopefully inspire the rest of the team while boosting the company’s reputation and instilling further confidence among our homeowners and prospective homeowners.”