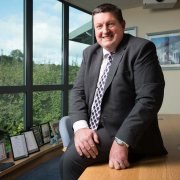 The largest South West-based independent homebuilder, Cavanna Homes, has appointed Keith Miller as its Managing Director to lead the company to its 100th anniversary and beyond.

The 48-year-old, whose career in homebuilding spans nearly three decades, most recently as Commercial Director for Redrow’s West Country division, has taken his place at the helm of the third generation Torquay-based family business that was established in 1923 by P D Cavanna.

Following in the footsteps of his own father and other family members, Keith’s first job as a bricklayer paved the way for subsequent roles as an estimator and then as a surveyor with building firms in the North West of England before first joining Redrow Homes in 1998 and climbing the ranks to become a Commercial Director and Regional Director in the South West.

Keith Miller believes the foundation for building Cavanna’s future success is to inspire more young people to choose a career in the region’s thriving construction industry.

“We need to inspire more young people to join the industry,” he continued. “According to the 2016 Annual Population Survey only 10% of the construction workforce in the South West is under the age of 24, compared to the national figure of 12.4%. When you take into account that well over a third of the workforce – 35% – in the South West are over-50, compared to 31% nationally, you can see that we might have a problem in the future.

“It’s a shame that we don’t have more young people choosing a career in homebuilding because it offers such a wide range of excellent opportunities; from skilled crafts and trades to a substantial amount of graduate positions.

“The building industry is a major player in the South West economy and we will be focusing on making even stronger links with schools and colleges in the region in order to promote a whole range of apprenticeships and careers.”

Cavanna Homes employs 115 staff from its Torquay headquarters with around 250 contractors currently working on sites across Devon including 504K in Plymouth, Fusion in Paignton, Primrose Hill in Torquay, Greenspire at Clyst St Mary near Exeter, Market Quarter at Holsworthy and Greenspire in Woodbury, near Exeter.

Although swapping his hard hat and boots for a suit and tie some time ago, Keith has recently built his own family home in Weston Super Mare, where he lives with his wife and two youngest children.

“There’s nothing like undertaking your own home building project to fully appreciate the detail and all the hard work that goes into developing a new home,” he laughed. “Not that I’d forgotten my days as a bricklayer!”

Cavanna Homes Executive Chairman Jeremy Cavanna, said: “The company, our staff and contractors can look forward to a bright future with Keith at the helm. He joins us with a wealth of experience in the construction industry and a real passion for homebuilding.

“We expect a period of steady growth but, like many other businesses, we remain cautious about the effect of Brexit on the economy and, in turn, on the housing market. That said, we are quietly confident that there will be a healthy market for new homes because there’s still a nationwide shortage of housing.”