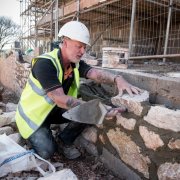 Traditional, handcrafted building styles have made way for more cost-effective and less time-consuming modern-day methods as the homebuilding industry works hard to deliver the government’s ambitious target of 300,000 new builds each year.

In the Westcountry however, our fourth-generation family firm is investing in the skills of an artisan bricklayer to help define the character of our homes and developments, in turn, helping to keep the ancient craft of stonemasonry alive. Born and bred in the South Hams, Terry Newman currently spends his three-day working week as a subcontractor for West Country Brickworks Ltd on projects for the firm.

We incorporate stonemasonry in our developments to reflect a local vernacular and to make a new scheme look more mature so it immediately fits into its existing surroundings.

Work incorporating traditional stonemasonry skills is intricate and time consuming: a three-metre stone panel takes around a day to build, while the same sized panel in bricks takes half-a-day, or a couple of hours for concrete blocks, plus wet weather can prolong a job involving stone work because the materials must be kept dry. “Nowadays, time and cost are big factors in the house building industry,” says 58-year-old Terry. “So if a developer includes stonemasonry in its schemes, they’re adding time, and time is money! I take my hat off to those firms including stonework at their new developments; it not only adds character and charm to modern buildings but it’s keeping the tradition alive.”

Terry trained as a bricklayer at South Devon College in the late 1970s when stonemasonry was included in the course, completing an apprenticeship with a local firm which “happened” to include stonemasonry in its remit. Nowadays, there are no colleges offering stonemasonry courses west of Bath and Weymouth, and you’ll be hard-pressed to find a construction or bricklaying course which offers even a hint of stonemasonry. But Terry has used the skills of his industry’s forefathers ever since his teens.

At our Dartington developments, Origins and Yarners Mill, Terry created stone walls and panels to add historic charm to the homes in-keeping with their position in the picturesque Dart Valley, and one of his most recent tasks has been the construction of a 30-metre wall at the entrance of Cavanna @ Wolborough Hill – a collection of 26 luxury-style homes in Newton Abbot – to replace the original wall.

Also on his immediate list of pending jobs is replacing the coping (the top of a wall which acts like a lid, keeping the rain out) at Palstone Meadow – our 26-home development in South Brent – and building a wall at Kings Orchard – our emerging 53-home scheme in Stoke Gabriel.

Traditionally, stone doesn’t tend to travel very far after it’s excavated, so where the job is determines what type of stone Terry works with. “In Cornwall it’s always shillet which is quarried there and has been used for building for centuries,” he says. “And in South Devon I often work with Stoneycombe, Glendinnings, Yennadon and Mill Hill Quarries stone, excavated on the doorstep.”

Type “stonemasonry” into Google and you’ll find numerous glossaries explaining the terminology, which is often linked to the geography as well as the stones themselves. Take the style of the coping at the wall at Cavanna @ Wolborough for example. Terry describes it as “cock and hen” (where vertically placed stones run along the top of a wall). “I don’t know why it’s called cock and hen,” laughs Terry. “That’s what we call it down in the Westcountry.” Elsewhere, it’s known as “buck and doe”.

Terry also describes using a method called “snail creep pointing” on the walls at his son’s house in Ivybridge. The effect can be achieved by using the handle of a metal watering can, cut in half. “It looks lovely when it’s finished,” Terry says, offering an insight into the intricacies of his craft, which includes being resourceful. Around a century ago it was typical for stonemasons to wade into rivers to collect stones. In the 90s, at a private residence in the South Hams, Terry found himself thigh-deep in a river which ran through the grounds, collecting stones to make sure the buttress he was building blended with the existing structure.

Terry explains that stone can either be left in its natural state, known as rustic stone, or can be cut, so the face of the stone (the part which faces out, forming the side of the wall) has a smoother finish. Terry prefers the former and describes working with “random rubble”, the technical term for a mixture of different sized and shaped stones, which makes his job rather like a giant 3D jigsaw puzzle.

Stonemasonry involves a huge variety of different styles and techniques and there is also far more to the pointing (or jointing) work (the joining together of the stones) than merely cementing between bricks. “At Origins I had to keep the jointing quite flush and create an indent of about half-an-inch between the stones,” he explains. “So instead of the surface being flat, the stones protrude a little. Usually the style will be down to the architects who designed the buildings, although often it will be the site manager who decides the finish.”

For the wall at Cavanna @ Wolborough, Terry said his biggest challenge was finding stones with “good faces”. “With slate or shillet you’ll use a larger quantity of stone but because of their shape it’s almost like stacking them on top of one another, whereas with random rubble a lot goes to waste because you have to have stones with good faces and which sit up well to create a wall with them. Although sometimes they won’t do either!”

Although building in stone can be costly and slows down the build process, when completed to a high standard it gives a far higher quality finish.

“To be good at stonemasonry, you have to like doing it because it takes time,” Terry reflects, explaining how his youngest son followed in his footsteps and co-owns a bricklaying company but has no interest in stonework. “I really enjoy it,” he admits. “When you first start a job, all you have is a pile of stones and you have to pick out the ones you can use, and then you watch it grow in front of you.

“Stonework is an art in itself. It adds character and charm to a building that’s not possible with contemporary materials or bricks alone.”