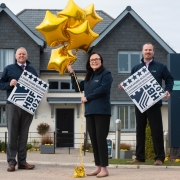 We’re proud to have once again been awarded the maximum five-star rating from the Home Builders Federation (HBF) following the annual prestigious customer satisfaction survey.

We are one of just 42 homebuilders nationwide to be awarded the top five-star rating after achieving over the 90 percent benchmark for recommendations from homebuyers.

The annual customer satisfaction survey asks new-build homeowners across the country for their feedback on their homebuilder’s build quality, customer service, and whether they would recommend them to family or friends.

Over 90 percent of our homeowners who completed the survey said they would recommend the firm as well as endorsing the build quality and the standard of finish.

Kerry Hamer, Head of Customer Services said: “We are thrilled to once again be recognised as a five-star homebuilder by the HBF. To achieve such a high degree of customer satisfaction, even during a challenging year, is fantastic and we are very grateful to our homebuyers and very proud of the result.

“Knowing that over 90 percent of homeowners would recommend us as a trusted builder is testament to our ongoing commitment to deliver the highest standards year on year.”

The scores given by new homebuyers to their homebuilder are the highest in 15 years, since the HBF survey was first launched in 2006.  They also show a fourth consecutive year of improved customer satisfaction.

Executive Chairman at the HBF, Stewart Baseley said: “The survey demonstrates that the industry is delivering an excellent level of service in the opinion of over 90% of its customers. The fact that we have seen four successive years of improved satisfaction levels shows the clear focus builders have been putting on the customer. That this level of satisfaction has been delivered during a pandemic that saw sites closed and builders unable to access homes for a period makes it even more of an achievement.

“To achieve a five-star rating, meaning that at least 90% of your customers would recommend you, is a fantastic achievement that requires commitment from everyone within the organisation.”

Last year we also celebrated being crowned Housebuilder of the Year for the second year running in the national Housebuilder Awards 2020 in the 0-300 units category.