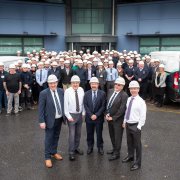 Westcountry homebuilder Cavanna Homes has announced another year of steady growth and a record number of sites in development across the south west.

The Torquay-based firm, which currently has new homes for sale in seven locations in Devon, Cornwall and Dorset, will be bringing forward an additional five sites this year, including Wincanton in Somerset, making it the busiest construction year in the company’s 95 year history.

Pre-audited figures show a £64.7 million turnover in 2018 which represents a 6.4% increase on the previous year.

A total of 290 new homes were sold; 201 open market and 89 affordable homes for rent or shared ownership through a housing association.

Last year’s results have been welcomed by the company, especially in light of the decline in the property market.

Cavanna Homes’ Managing Director Keith Miller explained: “It’s been well publicised that nationally the housing market has taken a bit of a downturn, and the South West is no exception. The uncertainty over a Brexit ‘deal or no deal’ is causing people to wait and see what this will mean for the country and their own personal circumstances. Whilst there has been a dip in numbers of visitors to our showhomes over the last few months, the prospective buyers we’ve seen have been extremely positive of both the quality and specification of our new homes as well as the overall developments.”

Looking forward, Keith Miller said: “Our business plan for 2019 has been adjusted to reflect the current market conditions, especially in the first quarter. Whilst we anticipate a slowdown, we are proceeding with cautious optimism during this unprecedented and unpredictable period.

“Cavanna Homes is a very well-established third generation family firm with 95 years of business under our belts and, during that time there have been many peaks and troughs in the housing market. Experience has taught us to remain focused on building high quality new homes in desirable Westcountry locations and to continue identifying new land opportunities in and around Devon, Cornwall, Somerset and Dorset, preparing ourselves for an inevitable upturn in the future.”

This year the company has a range of new homes for sale at seven Westcountry locations: Bodmin in Cornwall and Holsworthy, Barnstaple, Stoke Gabriel, Paignton, Torquay and Newton Poppleford in Devon.

Cavanna Homes has marked its 95th anniversary with the launch of a new brand and a new portfolio of house styles – The Westcountry Collection – which can be viewed at new showhomes opening in the New Year at Kings Orchard – Stoke Gabriel, Alfred’s Gate – Newton Poppleford and Moorland Vale – Bodmin.

Head of Sales Beverly Bridge said: “The Westcountry Collection has been developed in response to what people want from a new home, for example; open plan living areas, increased ceiling heights in ground floor rooms and on-trend fitted kitchens and bathrooms. The designs also incorporate external features which are in keeping with the local area. Visitors to our new showhomes are very welcome to see for themselves the standard of quality and design features we’re including.”

2018 saw Cavanna Homes collect a number of key industry awards, including the National House Building Council (NHBC) Pride in the Job award which was presented to two of the homebuilder’s site managers. A third site manager reached the finals of the Local Authority Building Control’s (LABC) annual Building Excellence Awards for ‘Residential Construction Professional of the Year’.

Cavanna Homes employs 126 staff with around 360 contractors working on sites across the South West. The company has also recruited 11 apprentices this year, some of whom are seconded to the building trades and others who are based at the head office in Torquay. This is the largest intake of apprentices in the company’s history.