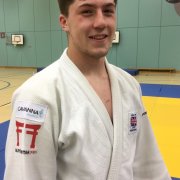 Plymouth teenager Max Gregory is preparing to represent England in the Commonwealth Judo Championships in the West Midlands this September, with support from Cavanna Homes.

18 year old Max, the son of our Site Manager, Gary Gregory, has most recently been learning his martial art at South Brent Judo Club and has begun intense training for the upcoming Judo tournament.

Max was awarded the title of British Champion for two years in a row, and has received recognition by Team GB Judo for his achievements throughout the year.

Martin Cavanna, Group Director said: “We’re proud to support upcoming talent in the Westcountry, and Max is a shining example.

“As the son of our Site Manager Gary, we’re all really excited to see how he gets on in the Commonwealth Championships in September and we’ll be cheering him on back in Devon!”.

As well as representing England and Great Britain internationally, Max has also been awarded two gold medals in both the Scottish Open and English Open Championships, securing his place as the number one ranked under 100kg junior.

Max said: “I started Judo when I was six years old, and haven’t looked back since. I love the sport and still can’t believe the experience and opportunities I’ve had to represent Team GB in Judo.

“With my grass roots in the South West, it’s great to be receive support from Cavanna Homes as a Westcountry business”.

Max is now residing in the Full Time Elite Development Squad in Walsall, where he will train as a full-time athlete alongside future and current Olympians.