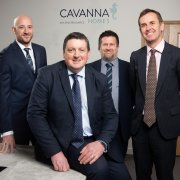 The Cavanna Group has announced three new appointments to its Board of Directors, completing a ten year succession plan for the family business which was established in 1923 in Torquay.

The Cavanna Group’s business operations, which include Cavanna Homes developments across the West Country, are overseen by Managing Director Keith Miller who joined the company in October 2017.  Alongside Keith on the Board are Andrew Addison who has been promoted to Operations Director, having previously served 12 months as Head of Operations. David Green who has been with Cavanna Homes since 2001 is promoted to Development Director and Scott Murray joins the firm as Group Finance Director, replacing Brian Bargent.

Brothers Jeremy and Jonathan Cavanna and their cousin Martin Cavanna, who are third generation members of the family business, will remain on the Board but have moved to non-executive roles within the Cavanna Group which remains entirely family-owned.

Keith Miller said: “2020 marks a significant milestone in Cavanna’s history as we complete the transition from a family owned and managed business to one that is now managed and directed by non-family members. While the Board of Directors are responsible for driving-forward this very successful company, we are answerable to the Cavanna shareholders, for whom the way in which we do business “the Cavanna Way”, embedding the family ethos in everything we do, is paramount.

“We are also pleased to have fourth generation Cavanna family members in the business and look forward to supporting their growth and success in the company.”

Paying tribute to the Cavanna family, Keith said; “Cavanna Homes charts a remarkable story of business success from humble beginnings when PD Cavanna arrived in Torquay with the tools of his trade and £200 of his family’s life savings, to a multi-million pound business which achieved national recognition as winner at the Housebuilder Awards 2019.

“Over the past three decades, Jeremy, Jonathan and Martin Cavanna have laid solid foundations for the future, having grown the company by a factor of one hundred under their leadership. Their legacy is a strong family ethos, professional standards and a commitment to achieving the highest level of customer and staff satisfaction.

“It is an honour and a privilege for me and my fellow directors to take this company to its centenary year and beyond. With the excellent team here at Cavanna Homes we will keep the company safe and profitable well into the future.”

Cavanna Homes employs 139 staff from its Torquay headquarters and around 250 contractors working on development sites across Devon, Cornwall and Somerset.

In 2019 Cavanna Homes produced a turnover of £50.9million on 169 open market sales and 59 affordable homes. This year the firm will be building new homes in 14 locations including city, coast and countryside developments. In addition to the day to day business, Cavanna staff raised over £15,000 in 2019 for Children’s Hospice South West and have nominated the same charity for their fundraising efforts in 2020.

The company was recently named the UK’s Housebuilder of the Year 2019 at the national Housebuilder Awards in the medium category for housebuilders building between 200 and 1,500 homes a year.