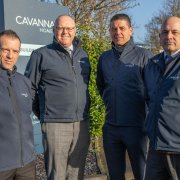 We’re proud to have strengthened our senior build team with the strategic appointment of Andy Sykes as Head of Construction.

Formerly a Build Manager with the firm, Andy’s promotion follows the retirement of Fred Sureshkumar after 18 years with the company, eight of which were at the helm of the construction operation.

Andy leads a team of three newly appointed Build Managers; Markus Micklewright, Mark Wyatt and Kurt Henson who will be actively involved in all development projects across the South West.

Commenting on the new build team, Andy said: “Our three Build Managers have real pedigree in the homebuilding sector, clocking-up almost nine decades of experience between them. This experience will enable us to deliver new homes to the highest specification, on time, on budget and within a safe and healthy working environment.”

Andy continued: “My focus for the next six months is to develop and implement new ideas and productive systems across our sites and to secure the NHBC five-star status for the quality of our new homes, which is awarded for receiving the highest levels of customer satisfaction.”

Markus Micklewright has joined from the Coyne Group and, with over 20 years’ experience in construction, he will oversee completion of the firm’s developments in Stoke Gabriel near Totnes, Newton Abbot, Tavistock and Bodmin in Cornwall.

Mark Wyatt was previously with McCarthy and Stone and takes responsibility for our sites in Holcombe and neighbouring Dawlish as well as Barnstaple in North Devon.

Kurt Henson has joined from Barratt David Wilson and is managing schemes in Wincanton in Somerset, Seaton in East Devon and two new developments in Exeter.

Mark Wyatt said: “Our role is to ensure all site teams are meeting their targets in terms of quality and performance and by being within a two-hour drive of company headquarters we are able to have a very hands-on approach.

“As homebuilders we need to operate at an optimum level at all times; making sure that we are considerate homebuilders by being good neighbours in the communities where we’re building, exceeding health and safety expectations for on-site teams and visitors alike and delivering a high-quality product.”

Managing Director Keith Miller said: “Fred Sureshkumar has helped Cavanna Homes achieve so much in his 18 years with the company, culminating in national recognition as the UK’s Housebuilder of the Year 2019.  His retirement has left a big pair of boots to fill and we are very proud and excited to have secured a senior build team of this calibre.

“These strategic appointments are a great start to the new year and will be key in supporting the company’s aim to achieving excellence in construction.”