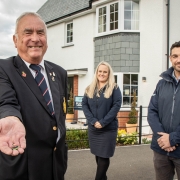 Richard Hayward, a 69-year-old former Master at Arms in the Royal Navy, and member of the Dawlish Royal British Legion, has designed the towns pin badges since 2015. Each year the badges have a different design variation of the poppy and black swan, with this year’s design featuring a black swan with a red poppy at the centre.

After driving past Cavanna Homes’ new community of homes at Barley Meadow, off Secmaton Lane, Richard approached the Sales Advisor to ask for the firm’s support for this year’s badges.

Liana Smith, Sales Advisor at Cavanna Homes said: “When Richard approached us about funding for this year’s Dawlish Poppy Appeal pin badge, we were really pleased to help with this brilliant initiative and to help raise money for such a worthy cause. At Cavanna Homes we’re proud to support the UK Armed Forces and we hope to see the Dawlish community, and our new homeowners at Barley Meadow, proudly wearing their badges this Armistice Day”.

So far this year, Richard has sold over 700 badges to the local community raising a fantastic £1,855 for the Royal British Legion Poppy Appeal.

Richard said: “For the past five years I’ve been designing distinctive badges for the Dawlish community to wear with pride on Remembrance Sunday, with all money raised going directly to the Royal British Legion Poppy Appeal. I’m grateful for Cavanna Homes’ support this year in helping to fund the costs of the design and creation of these bespoke badges – I’m already starting to plan the design for next year’s badge!”.